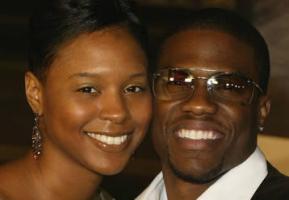 Kevin Hart's ex-wife Torrei says the actor was cheating on her with current wife, Eniko Parrish, before they split.

It began when Parrish, who is expecting her first child with Hart, said on social media earlier this month that she and Hart had been together for the past 8 years.

The problem with that was that Hart and Torrei got divorced 6 years ago.

In now deleted responses, Parrish responded to curious fans that: "Their marriage was broken way before I came in the picture.. They were separated living in separate homes. I was never a secret."

She claimed cheating rumors "were spread" by Torrei "years ago... she wanted to play the 'victim' and not own up to her wrong doing as well."

"I never wrecked any home," she insisted.

That commented prompted Torrei to respond.

"Eniko sweetheart normally I don’t feed in to this, but when you addressed me directly, you forced my hand to respond," she said. "We have made successful strides to become a loving co parenting family, but you have now left it open for my character to be questioned. You, Kevin, and I know the truth."

"Numbers don’t lie. Dates don’t lie at the end of the day. The most important thing to me is my children, so if my children see something that she's writing that makes me look like a liar, no."

"Either respond truthfully or don't respond at all," she advised.

That's when Parrish deleted her comments.