Kevin Costner Is a Dad for Seventh Time 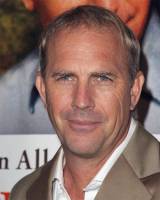 Kevin Costner is a father for the seventh time.

The couple has been married since 2004.