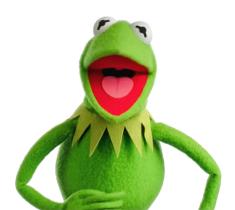 Matt Vogel, who replaced longtime Kermit the Frog puppeteer Steve Whitmire, made his debut as the beloved Muppet this week.

Vogel did the 'Muppet Thought of the Week' for his first appearance as Kermit.

"Dreams are how we figure out where we want to go. Life is how we get there," he says. "I'm headed this way."

Whitmire, who was fired after 17 years as the character, has claimed he's "devastated" after being blindsided by Disney.