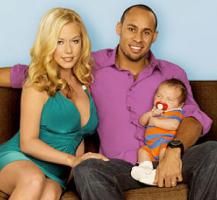 )'s husband, Hank Baskett, has been released by the Philadelphia Eagles to make room for Michael Vick on the team's 53-man roster.

The team says that the move was made so that Vick, who had been on the exempt list, can begin practicing with the team on Wednesday.

Vick wasn't allowed to play in the first two regular-season games as a penalty for participating in an unlawful interstate dog fighting ring. He will be fully reinstated and eligible to play in the third game of the 2009 season.

The news comes over a month after the newlyweds announced that they would be moving out of Los Angeles for a home in the Philadelphia, or at least somewhere a lot closer to it.

Needless to say things are no longer looking so sunny in Philadelphia for the pregnant Wilkinson and the pair will probably stay put in Los Angeles until Baskett can land on his feet with another NFL team.

The 24-year-old former 'Girl Next Door' and her 24-year-old man wed in July and are expecting their first child together around Christmas.