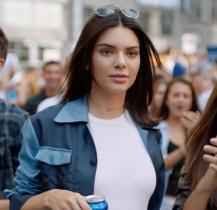 ) and Pepsi are being relentlessly mocked for a new ad in which the reality star and model ends a protest by simply handing a police officer a can of Pepsi.

In the two and a half minute ad, Kendall is in the midst of a photoshoot when she sees a protest taking shape on the street.

She joins the protest after taking off her blond wig and dark lipstick and walks up to the officers with a peace offering: a can of Pepsi.

"Kendall Jenner ended police brutality with a Pepsi. So if a cop tries to beat or kill you hand them a Pepsi asap!," laughed one user.

"So we should just give Putin & Assad & Trump a can of Pepsi and everything will be fine?," asks 'Silicon Valley' star Kumail Nanjiani.

Along with Jenner, Pepsi is being criticized for trying to trivialize and capitalize on legitimate protests like Black Lives Matter and the Women's March.

"If this Pepsi ad is the choice of a new generation, I'm gonna need that generation to turn in its badge," remarks Margaret Cho.

"This Pepsi ad is so unrealistic. Those protesters would have been Dr. Pepper Sprayed," quips Stephen Colbert.

Pepsi has now pulled the ad due to the backlash.

"Pepsi was trying to project a global a message of unity, peace and understanding. Clearly we missed the mark, and we apologize. We did not intend to make light of any serious issue," it says in a statement. "We are pulling the content and halting any further rollout. We also apologize for putting Kendall Jenner in this position."

Watch the Pepsi ad featuring Kendal Jenner while it's still available below.