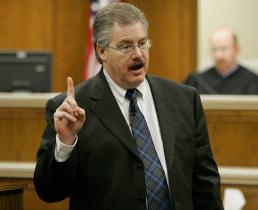 Ken Kratz, the man who prosecuted Steven Avery and Brendan Dassey, has given his first interview following the ruling that overturned Dassey's conviction.

The state attorney general's office has 90 days to decide whether to appeal the decision, seek a re-trial or release him from prison.

The villain of 'Making a Murderer', who served as special prosecutor against both men and used different narratives for both cases without regret, tells WBAY that he was surprised by the ruling.

"Usually a suppression hearing that has already gone through all of the state courts, the circuit court level, the court of appeals and of course the Supreme Court decided not to even hear it, is so unusual for a federal court to weigh in on that," Kratz said.

"Really shows you, I think, slanted nature of this, at least the decision and why it happened and where it came from."

Even though he's no longer part of the state, he says the logical thing would be to appeal the ruling.

"Appeal the decision to the 7th Circuit Court of Appeals. The reason I say that, is that it leaves the other three options open," he advises.

"To be sitting on the sideline with the rest of citizenry and only being able to sit back and just see what happens from news agencies is an awkward, uncomfortable position for me personally."