Kelsey Grammer Says Emmys Snubbed Him Because He's A Republican 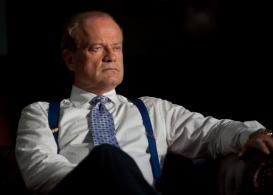 Kelsey Grammer, who has won five Emmys over the years for 'Fraiser' and his voiceover work on 'The Simpsons', believes his right-leaning political views kept him from earning a nomination for 'Boss'.

"It's hard to figure," Grammer told Jay Leno this week after he wondered why he had not been nominated for some of his best work on 'Boss' as a ruthless Chicago mayor. "It may have to do with several things, honestly, but I think it's possible... I'm a declared out-of-the-closet Republican in Hollywood

"Do I believe it's possible that some young person, young voting actor -- or even older voting member for the Emmys -- would sit there and go, 'Yeah, that's a great performance, but ooh, I just hate everything he stands for?' I don't believe that's possible," he said sarcastically.

Leno pointed out Grammer's past wins, which also came when he was a Republican, and said it may have to do more with Starz not being a prominent player in the cable landscape.

But the 'Cheers' and 'Fraiser' star responded "well, just after that last Emmy win, I became one," referring to when he publicly admitted his political leanings after donating $100,000 to the inauguration for President Bush in 2001.