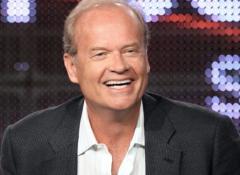 Kelsey Grammer has been hospitalized, roughly two months after the 'Frasier' actor suffered a heart attack.

Grammer's spokesman Stan Rosenfield says the 53-year-old was taken to the hospital by his wife Camille after he "was feeling a little faint" and is undergoing tests to determine the cause. More importantly, his publicist said he did not suffer an irregular heartbeat as has been reported by some outlets.

In late May, Grammer felt chest pains while paddle-boarding, and he was taken to a hospital where it was determined he had suffered a heart attack. He consequently spent four days in the hospital. At the time it was reported to be a 'mild' heart attack but last week Grammer said it was anything but, and he nearly died because his heart stopped beating.

He has appeared to be in good health and mood in recent days out promoting his new movie 'Swing Vote'. He stars alongside Kevin Costner in the movie, where the result of the US presidential election comes down to one man's vote. It hits theatres this Friday.