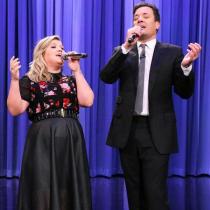 "What happened to Kelly Clarkson?" Hopkins wrote after her recent appearance on 'Graham Norton Live'. "Did she eat all of her backing singers? Happily I have wide-screen."

When some of her readers defended Clarkson because "she just had a baby," Hopkins said that was a failed excuse.

"Look, chubsters," she said. "Kelly Clarkson had a baby a year ago. That is no longer baby weight. That is carrot cake weight. Get over yourselves."

Hopkins later also appeared on 'Entertainment Tonight' and took her fat shaming up a notch.

"Kelly Clarkson is now a chunky monkey, if we're putting it kindly," she said. "My advice: she needs to get out there with her stroller and do some pushing and get some of that weight off."

"We give fat really cute names, don't we? We have baby weight, puppy fat, love handles, muffin top, chunky monkey—ultimately these are all nice names for something that's not very nice. You're supporting Kelly Clarkson because everybody likes to have a fat friend, because the great thing about a fat friend is it makes you feel slimmer."

But asked about the criticism during an interview with Heat magazine, Clarkson was as diplomatic as ever.

That's because she doesn't know me," she said. "I'm awesome! It doesn't bother me. It's a free world. Say what you will."

"I've just never cared what people think. It's more if I'm happy and I'm confident and feeling good. That's always been my thing. And more so now, since having a family – I don't seek out any other acceptance."