) has refused to allow any digital enhancement of her cleavage in publicity photos for her upcoming movie, 'The Duchess'.

Studio bosses apparently want to enlarge Knightley's breasts in publicity photos and poster for a more "fuller" look but Keira is said to be tired of the recurring topic.

"She has insisted that her figure stay in its natural state. She is proud of her body and doesn't want it altered," a production source tells the paper.

This isn't the first time Knightley has faced the dilemma. Her figure was also digitally altered in publicity photos and posters for 'King Arthur' (see below) and for the first 'Pirates of the Caribbean' movie. 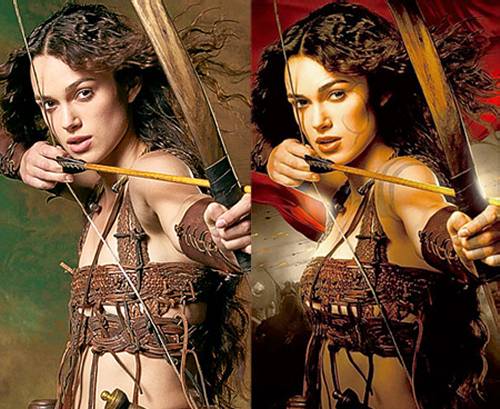 "Those things certainly weren't mine," she replied when asked about the enhancement at the time, and admitted she had to give final approval to the studio's request for the C-cup upgrade, "I was like, 'OK, fine. I honestly don't give a shit.'"

"I don't have any tits, so I can't show cleavage," Knightley said in a separate interview last year. Adding this is how she was explained the reason behind the enhancement: "But you're not actually allowed to be on a magazine cover in the US without at least a C cup because it turns people off. Apparently they have done market research and found that women want to see no less than a C cup on other women. Isn't that crazy? So they make my tits bigger."