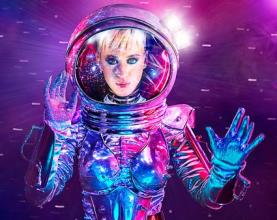 The 32-year-old singer made the announcement with a 30-second video of herself floating through space in a colorful, metallic space suit.

"I've been training with MTV in zero gravity, eating astronaut ice cream, and I'm on a group text with Buzz Aldrin and Neil deGrasse Tyson," she joked in a statement. "Come August 27th, I'll be ready to be your MOONWOMAN! Brace for impact, kids."

Kendrick Lamar leads the nominees with eight nods for his standout visual for 'Humble'. Perry and The Weeknd are tied for second with five nominations each.

The move is interesting because Perry recently ranted that "all the award shows are fake... awards that I've won are fake."

She joined the 'American Idol' reboot as a judge for its upcoming season in May.