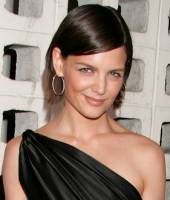 ) hinted at her impending split with Tom Cruise in an 'Elle' interview conducted six weeks ago.

Holmes was interviewed for the July issue of the magazine, one that has yet to hit newsstands, and commented she was entering a "new phase" in her life.

"I definitely feel much more comfortable in my own skin," the 33-year-old said.

"I feel sexier. I think in my 20s, it's like you're trying too hard to figure everything out. I'm starting to come into my own. It's like a new phase."

As for what it was like being married to Tom Cruise, Holmes deflected and said she needed on focus on herself because her husband had always been a star.

Holmes added that despite what many may believe, she wasn't being offered any roles simply because she was Mrs. Cruise.

"Things are not handed to anyone," she said. "If anything, you work a little bit harder when you're in such visible circumstances."

Holmes filed for divorce from Tom Cruise after five-years of marriage last week.