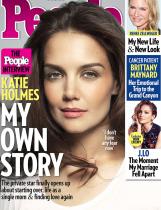 ) is finally speaking about her split from Tom Cruise in 2012.

She says her daughter "means everything to me."

"I'm learning every day, and I have been since the minute I became a mom," she says. "My patience has grown, but between 4 and 6 p.m... I mean, wow. Between tickle fights and glitter art, I try to throw in some manners along the way."