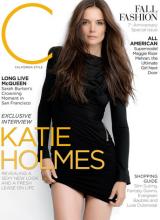 In an interview conducted a day before she filed for divorce, Katie Holmes (photos

) refused to mention her now ex, Tom Cruise by name, even though the tape transcripts covered "pages and pages", according to 'C Magazine's senior editor and interviewer.

When asked whether the birth of their daughter, Suri, had brought them closer together, Holmes became agitated and restless, and would only say: "I don't know. I mean. I don't know. People have been having babies a long time."

Holmes filed for divorce on June 26th, after 5 years of marriage, with actor Cruise. She not only did an interview for the magazine but days earlier posed for a photo shoot for C, which will feature the pictures in its September issue.

"Going back over the tapes, there were signs: Holmes was certainly very aware of herself, laying a couple cards on the table but never showing her whole hand," McKinnon, who conducted the interview for the lifestyle glossy, says. "Most noticeably, the one name decisively absent from her lexicon: Tom Cruise."

The 33-year-old Holmes also indicated that "she is ready to take on some more challenging roles" in her life, feels "more balanced" and has "more to bring to the table."

"I feel like I worked so much at such a young age that I really wanted to have life experiences," she said, presumably referring to her marriage to Cruise and the birth of their daughter.