Kathy Griffin 'No Longer Under Federal Investigation' Over Trump Beheading 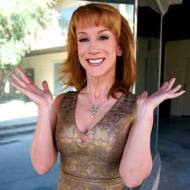 Kathy Griffin says she's no longer under federal investigation following the controversial photoshoot in which she held a bloody, decapitated head that was made to look like President Donald Trump.

"I am no longer under federal investigation," the 56-year-old comedian said on social media. "The case is closed, I have been completely exonerated. Finally."

Despite an apology, Griffin was fired from her CNN's New Year's Eve show over the stunt and several of her comedy shows were cancelled.

"I am sorry. I went too far," she wrote after facing a firestorm over the photoshoot at the time. "I was wrong."

"I don't think I'll have a career after this... he broke me," she said in tears at a press conference that followed. "I've had everybody turn on me, and I just want to make people laugh."

She was reportedly interviewed by the Secret Service for over an hour ahead of the investigation.