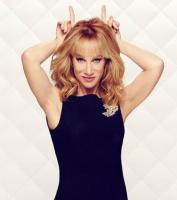 Kathy Griffin has turned in her 'Fashion Police' badge after just seven episodes.

Griffin announced she was leaving the show on Thursday, following Kelly Osbourne out the door, in a statement on Twitter.

"There is plenty to make fun of in pop culture without bringing people's bodies into it," she explained.

"I do not want to use my comedy to contribute to a culture of unattainable perfectionism and intolerance towards difference."

Her departure comes two weeks ago after Osbourne left the E! show complaining about co-host Giuliana Rancic's remarks that Zendaya Coleman's dreadlocks must smell like marijuana.

Griffin had joined 'Fashion Police' to fill the void left by the late Joan Rivers.