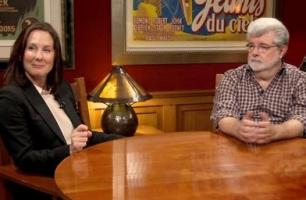 'Star Wars' fans have been wondering how new Lucasfilm boss Kathleen Kennedy was able to convince JJ Abrams to direct the next installment of the franchise -- after the director had already said 'No'.

In the new issue of 'The Hollywood Reporter', Kennedy details how she managed to land the in-demand director.

She says she called Abrams' CAA agent but told he was "too deeply engaged" in the next 'Star Trek' movie, other obligations at Paramount and his many television projects to even consider the job.

She managed to get him to agree to at least one meeting with her in the middle of December at his Bad Robot offices in Santa Monica.

Kennedy says her pitch simply was "please do Star Wars" and told him Oscar winner Michael Arndt ('Little Miss Sunshine', 'Toy Story 3') was writing the script and that Lawrence Kasdan, who wrote 'The Empire Strikes Back' and 'Return of the Jedi' was already on board as a consultant. And that was what got Abrams excited.

"He was flipping out when he found out that Michael and Larry were on the movie already," says Kennedy.

They met four days later with the writers for about three hours and "JJ was just on the ceiling when I walked out the door," she recalls. He had "very genuine concerns" about how he was going to be able to fit it in and how he would make it work with his wife and three kids, given the film wouldn't be shot in Los Angeles. Not to mention the weight of the franchise.

"If there was any pause on JJ's part, it was the same pause everybody has — including myself — stepping into this," she says. "Which is, it's daunting."

"We spent a lot of time talking about how meaningful Star Wars is and the depth of the mythology that George has created and how we carry that into the next chapter," she says. The deal finally closed on the afternoon of January 25.

"I learned firsthand how incredible and persuasive she is," Abrams recalls. "The thing about any pre-existing franchise — I'd sort of done that. But when I met with Kathy, it was suddenly very tantalizing."

The first film in the new trilogy is set to be released sometime in 2015. Although Kennedy explains, "our goal is to move as quickly as we can, and we'll see what happens. The timetable we care about is getting the story."