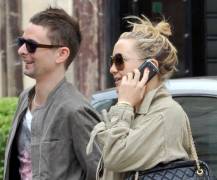 ) is expecting a baby with her boyfriend, Muse frontman Matthew Bellamy.

The actress, who has a 7-year-old son with ex-husband Chris Robinson, is said to be fourteen weeks pregnant.

Hudson, 31, and the 32-year-old British rocker have been dating for nine months.

"It was not planned, but they are excited and embracing it," a source tells 'Us Weekly'. "She is happy for Ryder to finally have a brother or sister. They couldn't be more excited."

Earlier this week, Owen Wilson, who previously dated Hudson, also announced he was expecting a child with his girlfriend.