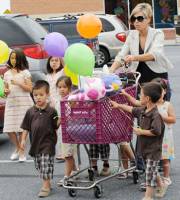 A spokesman for the Pennsylvania Department of Labor and Industry confirms that they've approved child-labor permits for Kate's twins and sextuplets so they can appear with their mother on 'Twist of Kate' and 'Kate Plus 8'.

The permits are valid for six months, then must be renewed.

"It'll have to be reapproved for every six months," explains a department spokesman.

"That's noted on the permit and it was noted in the permits following the investigation of Jon & Kate Plus 8."

Pennsylvania regulators concluded last month that permits should have been obtained for Gosselin's old show, 'Jon & Kate Plus 8'.

This after Jon Gosselin shut down production of the show and revealed that TLC had never obtained permits required to legally film his eight-children.

The series ended last year when Jon and Kate split.