Kate Gosselin: My Marriage Would've Ended Even Without Reality Show 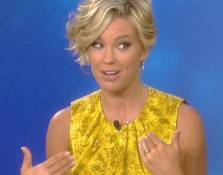 Kate Gosselin says she doesn't blame her failed marriage on her reality show 'Jon & Kate Plus 8'.

"A lot of people try to pin reality TV and say, 'My gosh. It ended in divorce. Big surprise,'" Gosselin tells Katie Couric.

"We went through a lot. The signs were always there, and obviously having eight kids in a short span of time didn't help that," she explained on the talk show Katie. "And I'm not at all blaming my kids, I'm just saying."

The couple finalized their divorce in December 2009 after ten years of marriage.

"I know the red flags were always there. So looking back, had you never heard the names Jon and Kate Gosselin, I'm certain that I would be in that spot now," Kate added. "It's hard because like any mom I just want the best for my kids."

Kate adds that she would be open to doing another reality show -- if it involved dating.

"I know the kids have a desire for me to be dating."

"For whatever reason it comes up at dinner like every single night, and they bring it up. I think that they miss that man role in our house, and the more hands on, full-time sort of feel."

"So for them, you know I had the frank discussion the other day, I said it's not something I can go to the store and buy."

"After a few years in realizing my barriers to dating and all of that and loving TV and the experiences. I would do it so it could be watched by families and my children."

"But I think that it would be fun because that would allow me to sort of meet people, have fun, show my fun side -- I do have one."

"I'm not always barking orders! And so to sort of do that, I do, I think it would be really fun."