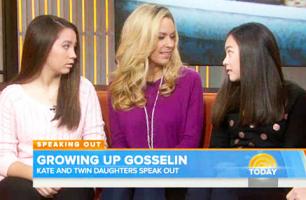 Days after Kate Gosselin's teenage twins responded with awkward silence in a 'Today' show interview, the trio made an appearance on 'The View' to redeem themselves.

The now 13-year-old twins, Mady and Cara, were first asked how they help their mother and six siblings.

"I unload the dishes," Cara said. "And Mady loads the dishwasher. She does do some work. And we, like, wipe down the counters and clean up dinner."

When Whoopi Goldberg asked the girls what they liked, she made it a point to told them not to look to their mother for guidance.

"If I am going to be 100 percent honest, I don't like Justin Bieber," Mady said. Although she admitted it was a different tale with One Direction and Niall Horan.

Asked about the public divorce in 2009, Mady said it wasn't as bad as most believe.

"Honestly, it wasn't hard for us," she said. "I think it was harder for mom, definitely. It didn't really affect me."

"We still saw both parents and we were little, like 9. We knew what was going on, but we didn't see the stuff."

As for how often they now see father Jon Gosselin, they didn't have an answer and simply shrugged their shoulders.