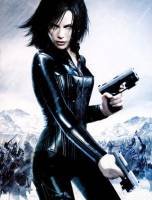 The first trailer for 'Underworld: Awakening', set for a January 2012 release, has debuted.

And let's face it, whether or not you're a fan of the franchise, the one reason to watch this film is Kate Beckinsale (photos

Beckinsale returns as leather-clad vampire warrioress Selene, who escapes imprisonment to find herself in a world where humans have discovered the existence of both Vampires and Lycans, and are conducting an all-out war to eradicate both immortal species.