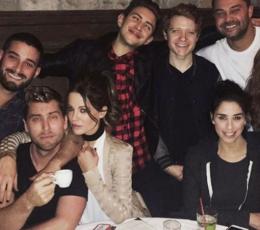 It began with a casual photo of the 43-year-old Underworld star seated with Molly Shannon, JoAnna Garcia, Stephanie Simbari, Lance Bass and Sarah Silverman at Craig's Restaurant in Hollywood.

"That Sarah is your daughter?," the fan asked. "Pretty like you."

"Granddaughter," replied Beckinsale. "We are very proud of her."

Silverman has been dating Sheen, Beckinsale's ex, since January 2014 and they are often spotted together.