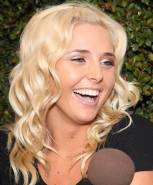 Karissa Shannon is threatening to sue Spencer Pratt if he releases a sex tape featuring her and boyfriend Sam Jones.

The Playboy model's (photos link) laywer Hayes F. Michel has sent a letter to the Hills villain, requesting that he return the footage that "was taken from her possession" and "contains private materials."

"As you know, it had been reported in the press that you were attempting to publish, distribute, sell, license or otherwise exploit filmed footage of Ms. Shannon. According to press reports, you are no longer threatening to do that. This decision is wise," writes the Playboy model's lawyer.

"Were you to follow through with your initial threat, Ms. Shannon would file a lawsuit to enjoin the sale and/or distribution and seek monetary damages from you."

Michel requests that Pratt return all copies of the tape and provide written confirmation that he will no longer attempt to "publish, distribute, sell, license or otherwise exploit the footage."

"Now that the decision not to sell them material has been made, the next move is the return of the filmed footage to Ms. Shannon. You are aware that it is her property that was taken from her possession. If it is not promptly returned, you will have converted Ms. Shannon's property for your own purpose, subjecting you to both compensatory and punitive damages."

Pratt addressed the letter on Twitter: "Maybe if I threaten to release a solo sex tape, humanity will pay me $5 million not to," he joked. "Would love to give Karissa Shannon her sex tape back, but it's currently serving as the keystone of my awesome sex tape fort."

Unless there's something to prove otherwise, we are going to chalk this up as a publicity stunt with both Karissa Shannon and Spencer Pratt in cahoots with each other.