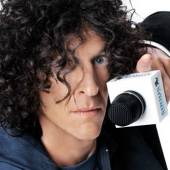 "I don't really know if I can even speak on it," DioGuardi said of the rumor on Wednesday. "But I don't know that he has a musical background. I think that if you're gonna replace Simon, you have to have that background."

On his radio show earlier this week, Stern said that he had discussions with 'Idol' but was only interested if the paycheck was right.

"There's not a better job on the planet than judging that f---ing karaoke contest," he said. "It would be the best thing that happened to me. What a cush job, $100 million for four months. Who wouldn't take that?"

Meanwhile, Kara isn't the only one who thinks Stern wouldn't be a good fit. The Parents Television Council, a conservative media watchdog group, said such a move would irreversibly damage the show.

"Any involvement by Howard Stern on 'American Idol' would be disastrous and would immediately destroy the show's hard-earned reputation as one of the most reliably family-friendly programs on broadcast television," said PTC President Tim Winter.

"We want Fox to dispel the rumor that Howard Stern is being considered to take over Simon Cowell's seat as judge."