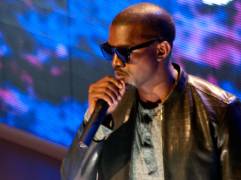 Kanye West was spotted for the first time on Thursday since being hospitalized.

West was released from UCLA Medical Center in Los Angeles on November 30, after a week there following his meltdown.

According to reports, he has been living separately from wife Kim Kardashian (photos

) and their children as he recovers.