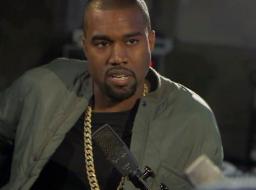 Kanye West is known for saying some outrageous things in interviews and his latest interview with GQ magazine is no exception.

In the interview, West explains how Kim Kardashian (photos

) is his dinosaur and raves that their pairing is like having two LeBrons, referring to NBA superstar LeBron James, on one team.

"Like they said in Step Brothers: Never lose your dinosaur," he explains. "This is the ultimate example of a person never losing his dinosaur. Meaning that even as I grew in cultural awareness and respect and was put higher in the class system in some way for being this musician, I never lost my dinosaur."

"Kim is this girl who f--king turns me on. I love her. This is who I want to be next to and be around. And then people would try to say, 'Well, you know, if you're a musician, you should be with a musician, and if you want to design, you need to be with a girl from the design world.' I don't give a f--k about people's opinions," he says.

"Because when a kid falls in love with an airplane or a bike or a dinosaur—especially if you're an only child and it's not because of the book that the sibling was reading—it's like, f--k, you mean to tell me that the dinosaurs walked the earth and stuff like that?! That's amazing! You mean to tell me that these giant multi-ton crafts can fly that fast and that loud, and they can flip, and there's danger, the possibility of them exploding? That's f--king cool!"

"You mean to tell me that this girl with this f--king body and this face is also into style, and she's a nice person, and she has her own money and is family-oriented? That's just as cool as a f--king fighter jet or dinosaur! And just as rarely seen," he gushes.

"I feel like you're stronger as a team," West adds. "Because when you know you have a team player, it's not one on the world anymore. At least it's two on the world. Both me and Kim had to learn how to communicate as a team. These are two LeBrons, you know?"

West goes on to say he doesn't care how much criticism his relationship gets.

"When people try to spoof or talk s--t, it's like: But you're mad because basically Kim is the type of girl that, her entire life, if you were in school with her, most people would be studying and up late nights, but for some reason she would have the skill set to go and grab the one book, turn to the exact page, and just magically say, 'That's the exact answer.' Or she could wink at the person who had done all the work and get it done anyway," he says.

"And the point of life is getting s--t done and being happy."

Asked about his past altercations with the paparazzi, West says he's a harmless blowfish.

"People have me pinned as a shark or a predator in some way, and in no way and I that. I wouldn't want to hurt anyone. I want to defend people. I want to help people."