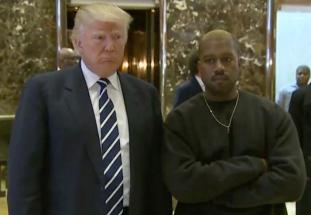 Kanye West has very quietly deleted all his Twitter posts defending Donald Trump and his meeting with the then President-Elect.

West, who met with Trump at Trump Tower in December, explained at the time his meeting with Trump was "to discuss multicultural issues."

"These issues included bullying, supporting teachers, modernizing curriculums, and violence in Chicago," he said. "I feel it is important to have a direct line of communication with our future President if we truly want change."

But now merely two weeks into the Presidency, West is apparently distancing himself from Trump and has deleted all his posts about the meeting.

The rapper, who was raised in Chicago, has yet to comment on the reason for the scrubbing of history but TMZ says West is unhappy with Trump's tightening of abortion laws, plans to build the wall along the Mexican border and the travel ban.