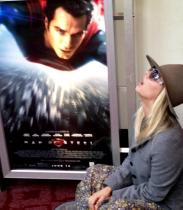 ) is blaming her fling with 'Man of Steel' star Henry Cavill for making her a paparazzi target.

"I had no one following me until I met Superman," Kaley tells Cosmopolitan of her ten day romance with Cavill.

"I've been in this business for 20 years, and my whole life, I could go anywhere, do anything. There had not been one paparazzi photo of me until like several months ago. The recognition was crazy."

A development that wasn't easy because Cuoco says she's "obsessed" about what people think.

"I started reading comments and thought, 'Maybe I need to make more of an effort and not go out in my UGGs and be disgusting.' So I started putting on makeup."

"And they started writing, 'Wow, someone really likes being in front of the camera' and 'Her hair's done now for coffee.' I couldn't do anything right. Why am I reading this stuff? But I'm obsessed. I openly admit to being totally insane about that."

"I admit it happened fast, but that's who I am. When we met, I knew he was the one," she says. "I felt like a rock star and a bada--. What was amazing in that room, it was so full of love."

"It was like nothing I'd ever been to before, and it was exactly what we wanted it to be. It was the eighth wonder of the world, the greatest wedding of all time."

Her 'Big Bang Theory' co-star Johnny Galecki, who she dated for two years, was there to support her.

"It took a minute, a bit of awkwardness," she remembers when they broke up. "But by the grace of God, we became best buddies and moved on in such an elegant way. He's one of my closest friends."

"He was in the front row at my wedding, with a huge smile on his face."