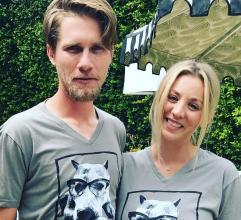 ) is engaged to boyfriend Karl Cook.

"Well after nearly two years I finally got up the courage to ask her to marry me. This is the best night of my life and I think the video shows it is the best night for Kaley as well... she said yes!" Cook said as he shared video of Cuoco with tears across her face.

Hours ealier, the professional equestrian had presented the actress with a fake ring while shopping at the local Target.

"On my loves birthday I got her everything she has always wanted," he joked with a fake ring, "now judging by her face maybe not, it's the thought that counts right."