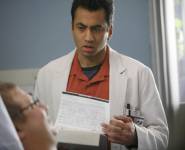 The White House today announced it has hired actor Kal Penn as a liaison between President Barack Obama's administration and Asian constituents.

We knew this week's episode of 'House' was going to be big, or 'beyond words' as Fox put it, but if you've seen it you know why the announcement was held off until exactly this week as Penn's character, Lawrence Kutner, committed suicide to leave viewers absolutely shocked at the sudden turn of events.

But it turns out there was a good reason after all, at least behind the scenes, as the 'Harold & Kumar Go to White Castle' actor is heading to the White House to connect Obama with the Asian-American and Pacific Islander communities.

And you definitely have to admire Penn for the move considering he will be taking a rather large pay cut with the foray into politics: "There's not a lot of financial reward in these jobs. But, obviously, the opportunity to serve in a capacity like this is an incredible honor," Penn tells 'Entertainment Weekly'.

"I've been thinking about it for a while. I love what I do as an actor. I couldn't love it more," says Penn. "But probably from the time I was a kid, I really enjoyed that balance between the arts and public service. I went to a performing arts high school, but I still took a bunch of those dorky political science classes."

"It's probably because of the value system my grandparents instilled in me. They marched with Gandhi in the Indian independence movement, and that was always in the back of my head."

"The ultimate irony, of course, is that I love being on 'House'. There's not a smarter group of people that I've been surrounded by in television. So I thought about it for a very long time before I went and talked to the producers. We had a very long discussion."

"I remember David Shore saying, 'Are you telling me that you're unhappy with the show and that you want to leave so you can go off and do a different show?' And I was like, 'Not at all. I'm actually saying the exact opposite, which is I'm having an incredible time, but there's something aching in me to do something completely different and take a break from the acting thing for a while'. And with their blessing, we were able to work it out."

"One of the things I love about our show is you never know what's going to happen," Penn says of how the writers put his exit into motion. "So that news struck me in the same way we hope it strikes the audience: there was a little bit of anger and some depression. You really go through those emotions, especially when somebody dies in that fashion. Ultimately, it was a really interesting choice for them."

"We don't really know why he did it, unless it's resolved in the episodes after I left, which, I'm not privy to anymore. It's rare nowadays to be able to do that on network television, but they managed to."

"I think bittersweet is the probably the best way to describe my last day. The contrast of knowing that I want to move on and do something completely different, with the incredibly violent and incredibly depressing thing that happens to my character. It's not like I'm retiring from acting. I certainly intend to come back at some point, but right now I just felt like my calling was in public service, and so we moved forward with that."