Justin Timberlake Talks About Idea Of Friends with Benefits 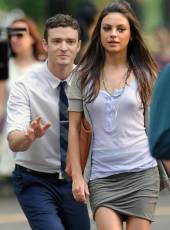 Justin Timberlake may play a guy in a casual relationship in his upcoming film 'Friends with Benefits' but he doesn't think that's such a good idea in real life.

"It's a really good idea until it becomes a bad idea," Timberlake told Ellen DeGeneres in an interview with co-star Mila Kunis (photos

), said it's difficult to keep emotions in check once you have sex.

"If you're going to be intimate with someone at some point somebody's going to feel something."

"If it's bad, then no one's going to develop any feelings," quipped DeGeneres.

"They'll develop a feeling," added Timberlake, "but it's going to be uh, uh."

The singer turned actor denied any romantic relationship with Kunis.