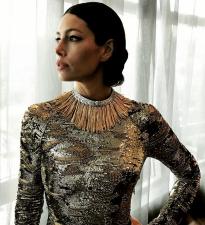 Justin Timberlake knew how to flatter his wife while being interviewed on the Oscars red carpet.

When asked by Ryan Seacrest about what Jessica Biel (photos

) was wearing, Timberlake interjected: "I call it perfection, baby!"

"When I was first pitched the movie, I was pitched the character and also doing all the music," he recalled. "They had already cleared songs like 'True Colors' and the 'Sound of Silence'... all these pop songs from different genres."

"So our task was to sort of write a song that encapsulated the message of the movie. By the way, we wanted people to be able to dance to it, too."

"I just felt like when I was watching the movie, it reminded me of disco," explained Timberlake. "That's where I got the idea to say, 'Why don't we try to do like a modern disco?'"