Justin Timberlake Under Review For Ballot Selfie While Voting Early 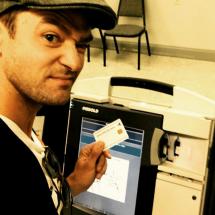 Justin Timberlake avoided brush with the law on Tuesday after posting a ballot selfie of himself voting in Memphis.

Timberlake flew from Los Angeles to his hometown of Memphis to cast an early ballot ahead of the November 8 election. However, his selfie during the vote on social media caught the attention of Tennessee authorities.

"Hey! You! Yeah, YOU! I just flew from LA to Memphis to #rockthevote," he captioned the post. "There could be early voting in your town too. If not, November 8th! Choose to have a voice! If you don't, then we can't HEAR YOU! Get out and VOTE."

But despite his good intentions, Timberlake wasn't aware that it's illegal to take photos inside polling locations in Tennessee.

The Shelby County District Attorney's Office said it "was made aware of a possible violation of election law. The matter is under review by the D.A.'s office."

Violators can face a 30-day jail sentence and a fine. However, after reviewing the situation, it let the matter go because no formal complaint was filed.

The singer has since also taken down his ballot selfie.