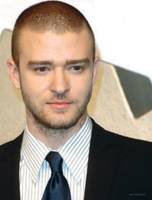 Justin Timberlake is coming clean about his drug habit.

"Absolutely," the singer-actor candidly tells 'Playboy' magazine in an interview when asked if he smokes pot.

"The only thing pot does for me is it gets me to stop thinking. Sometimes I have a brain that needs to be turned off. Some people are just better high."

The 30-year-old also admits that he was stoned when he was famously 'Punk'd' on Ashton Kutcher prank show.

Timberlake was completely taken in when pranksters pretended to be government agents seized all of his property because of unpaid income taxes.

He appeared to be on the verge of tears at one point and ended up calling his mom.

"Yeah. I actually stopped smoking pot for nine to 10 months after that," says Timberlake. "I was so stoned."

"If you ask my friends, if they're honest they would probably say that's the only way to get me as dizzy as I was."

"What you didn't see from the episode, because it was a 45-minute affair cut down to 10 minutes, was me showing up and being like, 'What the f--k are you people doing on my property? Get the f--k off my property! Get the f--k out of here!'"

"Then they started rattling off my parents' address, and I was like, 'Holy shit. Hold on a second.' I mean, everybody was got good on that show—me probably the best."

High or not, Timberlake says he's ready to slow down and that means no new music on the horizon.

"I feel I'm just getting to a point in my life where I'm looking around, going, There's a lot to enjoy if I can just sit still, actually stop and take more time."

"I don't have a single song ready to go. People keep asking me when a new song or album is coming out, and I don't know what to say. Music is not my focus right now. It may be someday."

"It could happen next month or next year but right now it's not."

Timberlake hasn't released an album since 2006.