Justin Bieber To Star In 3-D Movie About His Life 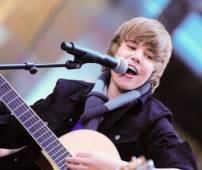 After his television debut on the season premiere of CSI, Justin Bieber will add movie star to his resume.

The 16-year-old pop sensation has signed on to produce and star in a 3-D film about his life and career, so far.

The yet-to-be-titled biopic film is set for release on Valentine Day weekend of 2011. It will include footage from his current tour and feature 3-D footage from his 'My World 2.0' concert tour.

Bieber first announced the "incredible news" to his fans on Twitter.

"Next Valentine's we are coming with a major 3D Movie telling the story with an Oscar winning director and also filming the tour at MSG in NYC!!," he explained.

"The story, the songs, the concert. Can u imagine how big my man (his bodyguard) Kenny Hamilton's forehead will b on a movie screen. Lol."

"This is so sick!! Gonna come out in theatres Worldwide Valentine's 2011!!!," he added. "I'm taking this thing worldwide thanks to u all!! Hyped!!"

"When the idea for a movie first came to us, we knew immediately this was our chance to give something very special back to the all fans who have been a huge source of inspiration and support throughout my entire career thus far," he said in a more formal statement.

"They simply make my dreams come true everyday. I cannot wait to share all the great experiences I've had over the last few years with them."

This of course is in addition to the memoir Bieber will be releasing in October.