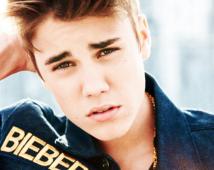 This after Rogen, who called the singer an "obnoxious, ungrateful piece of s--t" in March, reiterated his views in an interview with Howard Stern this week.

"He's a good example of someone, who you meet, who you think you are going to hate — and then you get to hate him - you meet him and he lives up to every one of your expectations," Rogen said.

“I saw him again at like an MTV awards show, he literally had a snake wrapped around his f–--ing wrist that he was wearing," said Rogen. "I talked to him for like five minutes. No humility, no awareness, no sense that ‘I appeal to young, young people, maybe a grown man who works in comedy doesn't f---ing give a sh-t about me."

"Maybe I should act in such a way that perhaps this isn't the great experience of his f--—ing life... I remember thinking 'He's a piece of sh-t.'"

Bieber is now trying to smooth things over with a message on Twitter. But almost as you'd expect, Bieber misspells Rogen's name.

"Seth Rogan, sorry I didnt bow down when I asked 2 meet u," Bieber writes. "Was probably a bit shy and didn't want to be over the top but still. love ur movies."