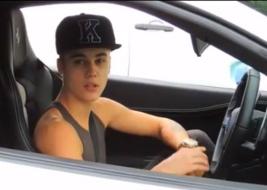 Justin Bieber punched a fan through a car window while arriving at his concert in Barcelona on Tuesday.

The singer lashed out at a fan who was attempting to touch him through the open window of his chauffeur driven car. He pushed the fan's arm out of the window then connected with a punch right to his face.

The fan was shocked to see blood pouring out of his lip and said "He just punched me! I touched him this and he went boom!"

He showed his injury to other fans around him who were just as surprised to see Bieber's handiwork.