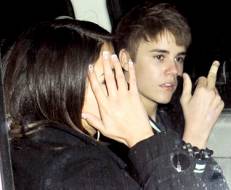 Bieber, who turned 17 this week, made the gesture after the two got into the car while Gomez shielded her face with her hands.

"Had a great birthday and at the end of the night we got surrounded by paparazzi and I reacted in a way i know better. I'm sorry," Bieber wrote on Twitter, fearing he had been caught on camera.

"It's not always easy but i know better than to react in anger."

"Life has it's ups and downs," he continued, "but u guys r always there for me. I will make my mistakes but I promise to continue to grow with u and try to do right."

The singer, who gave a lock of his hair to Ellen DeGeneres in a signed box, was also ecstatic that the auction fetched $40,668 for charity.

"On a better note i need to say Thank You to my fans. We raised over 40k for charity for my birthday."

But it wasn't so much a crazed fan who won the auction, but rather an online casino known for buying the weird for publicity.