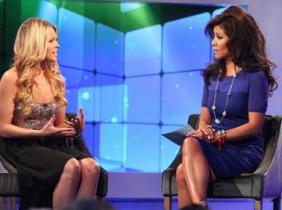 In a chat with David Letterman on Thursday night, 'Big Brother' host Julie Chen revealed she had to be forced to join the show when it debuted sixteen seasons ago.

"I had just started at the network about six to eight months. I was on the morning show. I was hired from local news. I was 29," explained Chen. "I was at the network!"

"You know, every young journalist, the pinnacle is '60 Minutes'. I thought one day if I work really hard, I saw the big ticking clock behind my head."

"So I get a call from the head of news at the time and I'm thinking 'Wow, 60 Minutes already? I've only been here eight months.'"

"And he says to me 'I got a call from the West Coast and they want you to, in addition to being the news anchor in the morning, they want you to fly out to LA every week to host this new reality show called 'Big Brother.'"

"I said to him flat out that if I take this job, because it was with the entertainment division, and I forever sealing the door shot to being on '60 Minutes'. He said 'Probably, yes.' He was honest."

"And I said thank you for your honesty. If that's the case then I decline, no thank you. And he said to me 'You're new at this network. You're young and have a bright career. This would be seen as insubordination.'"

"He said 'We could technically assign you this,'" Chen said. "I didn't know what to say and thought I guess I'll give it a try."

Chen admitted she was "awful" and laughed that even '60 Minutes' legend Andy Rooney called for her firing from the news division.