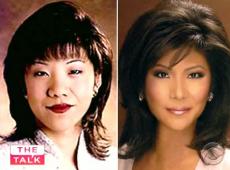 It's been no secret that Julie Chen got plastic surgery to stand out when she was starting her career, but on this week's 'The Talk' she finally admitted to one specific procedure.

"My secret dates back to -- my heart is racing -- it dates back to when I was 25 years old and I was working as a local news reporter in Dayton, Ohio," she said.

"I asked my news director if over the holidays, if anchors want to take vacations, could I fill in? And he said, 'You will never be on this anchor desk, because you're Chinese.'"

"He said, 'Let's face it Julie, how relatable are you to our community? How big of an Asian community do we have in Dayton? On top of that, because of your Asian eyes, I've noticed that when you're on camera, you look disinterested and bored.'"

"Well, fast forward, I'm like I need to get another job, if I can, so I start meeting with agents for career advice," she recalled. "This one big-time agent basically told me the same thing."

"He said, 'I cannot represent you unless you get plastic surgery to make your eyes look bigger'. He then whips out a list of plastic surgeons who have done this surgery."

Chen said she eventually decided to get the surgery.

"It felt like a dagger in my heart. It was racism. Now, it's like sometimes I wonder, but I will say after I had that done everything, the ball did roll for me. And I wondered, did I give in to the man by doing this?"

"I don't like to live with regret. I did it, I moved on. No one's more proud of being Chinese than I am, and I have to live with the decisions I've made, every decision I've made -- it got to where we are today," she said.

"I have to live with every decision that I've made," she said. "And it got me to where we are today. And I'm not going to look back."

Chen's "reveal" was met with supportive reactions from the rest of the panel.