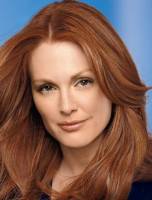 ) says she prepared for her 'daunting' role as Sarah Palin by doing her research.

"It was a daunting task to play somebody who is not only a living figure but a hugely well-known one," Moore said at the HBO Television Critics Association event. "I wanted to be as accurate as possible."

Moore said she hired a vocal coach almost immediately after she was cast in the HBO film to capture the former Alaksa Governor and Republican Vice Presidential candidate's 'idiosyncratic' way of speaking -- a fact that was evident in the first teaser.

"We were all very familiar with her and with those sort of iconic moments. It was just four years ago," she said. "I'm portraying a real human being and it's my responsibility as an actor to portray them as accurate as possible. Her moments of brilliance and populism and charisma, and her lack of experience."

"I did a tremendous amount of research," Moore said as she explained she studied news footage, watched Palin's reality show and even read her book for an insight into her character.

"One of the things I watched was her reality show, Sarah Palin's Alaska, to familiarize myself with her and the way she interacts with her family," she said. "That's, frankly, adorable. She's really a caring, involved parent. You don't see that happening on this stage."

"I certainly have profound respect for the historical nature of her candidacy. From where she was taken from state government to the national stage," said Moore. "The fact that she was able to perform the way she was able to was simply amazing.”

'Game Change', which follows John McCain's 2008 presidential campaign and his selection of Palin as his running mate, will air on HBO on Saturday, March 10.

Palin declined requests to be interviewed for research or a more accurate portrayal for the film.