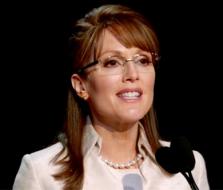 The first trailer for HBO's 'Game Change' has been released.

The film, based on John Heilemann and Mark Halperin‘s bestselling novel of the same name, chronicles the behind the scene events of the 2008 presidential election.

While Moore only delivers just one line in the trailer, her first impression of Palin is a good one.

The film will air on the network in March.