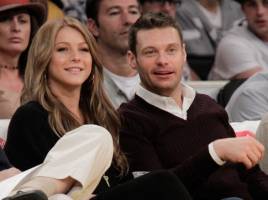 "He's phenomenal," Julianne Hough gushes about Seacrest in an interview set to air Tuesday on 'The Ellen DeGeneres Show'.

"He's really romantic. He's not even in town and I got in my car and there are flowers everywhere!"

"And for my birthday, same thing. Like, flowers everywhere. I was almost embarrassed. You walk in and you're like, 'Is this my room? I don't even know.' I'm kind of embarrassed."

"Like in a hotel room he did that?" asks Ellen, a longtime friend of Seacrest, who is not only 'American Idol' host, but E! News anchor, radio personality, and reality-TV producer.

"Yeah, because we're obviously traveling," Hough says as she tries to explain away the hotel room.

Hough says it's true that Seacrest has already met her parents, but she doesn't consider that a big deal.