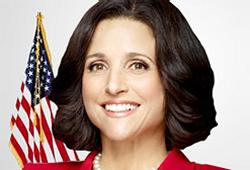 Julia Louis-Dreyfus' 'Veep' co-stars had a surprise for her as she battles breast cancer.

Louis-Dreyfus, who revealed her diagnosis in September, shared a video Tony Hale and Timothy Simons recorded for her to Katy Perry (photos

Simons plays "Cancer" while Hale plays the role of the actress trying to kick its ass.

"How lucky am I that these bozos have my back?" Louis-Dreyfus wrote alongside the video. "What a moving inspiration to my day. I've watched it a gazillion times."