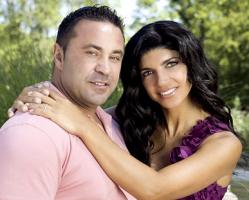 A federal judge has rejected Teresa Giudice's bid to serve most of her prison sentence in a halfway house.

The 'Real Housewives of New Jersey' star had filed a letter this week asking that she should be allowed to serve in a halfway house.

The judge said Giudice should've made the request during her sentencing while pointing out it would have likely been rejected even then.

The reality star said the sentence was a "shock" and called it a "wake up call."