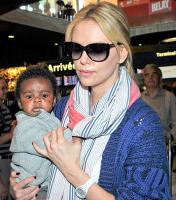 ) has been handed a lifetime ban from the state bench.

According to an agreement, Faulkner County Circuit Judge Mike Maggio will be suspended with pay for the remainder of 2014 and then leave office.

The settlement comes after Maggio revealed details of the adoption, using a pseudonym, before it was even public.

When one person asked "Did she get herself a black baby?", Maggio, using the name 'geauxjudge' replied "Yep."

Maggio tried to delete and alter his comments after investigators were on his trail but it was too late.

The judge had also come under fire in recent years after expressing his opinion on everything from how to avoid a drunken driving charge by refusing to cooperate with police, wanting to obtain photos from a case in which a cheerleader was accused of sex with a minor and wives who "withhold sex."