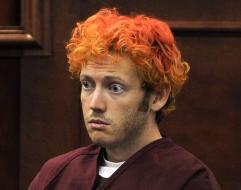 Judge Carlos Samour Jr. ruled on Tuesday that James Holmes, who was arrested for killing 12 people at a midnight screening of 'The Dark Knight Rises', could change his plea to not guilty by reason of insanity.

"I find Mr. Holmes understands the effects and consequences of the not guilty by reason of insanity plea," Judge Carlos Samour Jr. said. "He was looking at the advisement and appeared to be following along."

Holmes originally entered a standard not-guilty plea. He will now undergo a series of mental health tests to determine his state at the time of the shootings.

Colorado law defines insanity as the inability to distinguish right from wrong caused by a diseased or defective mind. The insanity plea is widely thought of as Holmes's best chance of avoiding execution in the state.

If found not guilty by reason of insanity, he would be committed indefinitely to the state mental hospital.