Joy Behar: I Walked Off 'View' Because Of O'Reilly's 'Hate Speech' 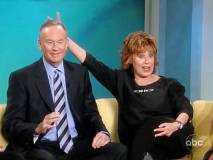 In her HLN show, Joy Behar tried to explain why she stormed off 'The View' last week during a heated argument with guest Bill O'Reilly.

"Today on 'The View,' Bill O'Reilly had a real pinhead moment," began Behar.

"First he said a mosque should not be built close to Ground Zero here in New York, but then he said this," Behar said as she played a clip of the appearance in which the Fox News personality said "Muslims killed us on 9/11."

"Well I was really angry," she said. "I thought he was saying something that I construe as hate speech, frankly. It upsets me, as you can see. To say Muslims killed us on 9/11. You could say that about any group, to lump an entire group like that."

Behar was joined by former Minnesota governor Jesse Ventura to discuss the comment.

"He's a spineless puke," Ventura gave his opinion of O'Reilly. "The whole Fox won't have me on -- the nighttime guys. I call them the Three Stooges, and we all know which one's Curly. If Glenn Beck isn't Curly Howard's kid. I view him and Hannity and them as the Three Stooges because if they can't intimidate you, they won't have you on."

Meanwhile, on his own Fox program. Bill O'Reilly told viewers: "No one I know wants to insult Muslims, but many are tired of the political correctness surrounding the 9/11 attack."

"I enjoy jousting with the 'View' ladies because, with the exception of Elisabeth Hasselbeck, they don't see it my way and I want their audience to hear both sides."