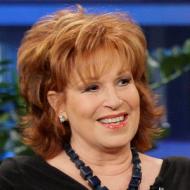 Joy Behar is criticizing Elisabeth Hasselbeck for attacking Rosie O'Donnell for her return to 'The View'.

This after Hasselbeck called in to 'Fox & Friends' during her vacation to slam O'Donnell for being in the running to return for Season 18 of 'The View'.

"I think this has been in the works for a long time," said the former panelist. "I know Rosie very well. We worked quite closely. Talk about not securing the border!"

"I thought that was really kind of below-the-belt, to say she spits in the face of the military," said Behar. "I would like Elisabeth to explain herself."

"I mean, say what you want about Rosie O'Donnell, she's a very generous person, she has a million kids, she's always rescuing children—I mean, she has more kids than Mrs. Duggar at this point on her roster. Her son is at The Citadel," she said referring to the military school. "What more does Elisabeth want?"

"To say that she spits in the face of the military, that's a dangerous thing to say about somebody. I think it's a hate-filled remark."

"First of all, it's not true. I would like her to prove it. Everything is fiction on Fox anyway, what am I talking about?"